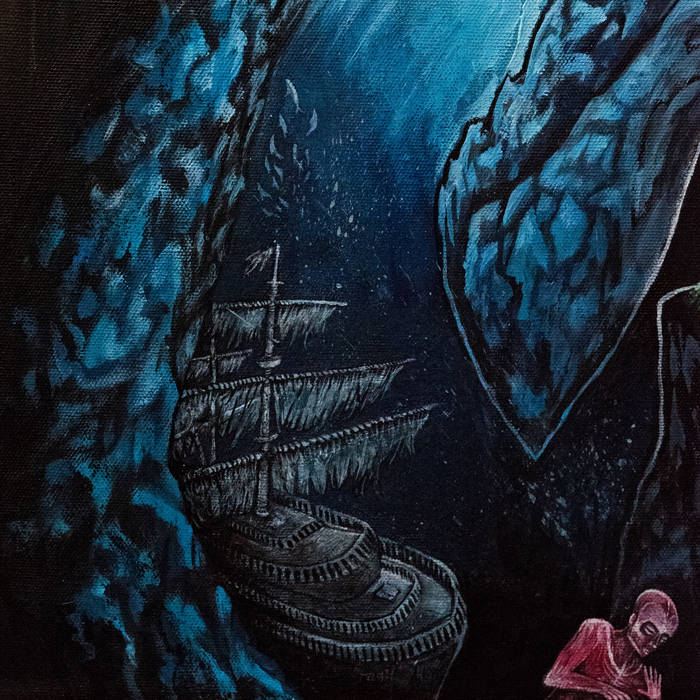 16 minutes of madness,
Created over the course of seven years.
For you,
All for none.

Went the long way down
And preached it's wonders, lies
Kept beneath the ground
You're severed from your gain's price

So chitter back on land and
Boast as if your great (as long you can!)
Scared won't say you're tasteless
Distant off the sea's face

Figurative, vain
And literally dead meat
Shattered as you wished
Gone in the MAELSTROM!

The winds will carry salt
Swallows, crows, and an albatross
The kraken tear you down
Sharks and cancers guts out

Sold sanity, lost your face
Left a trace on your reflection
But not on your self

Lodges for the high
Spades for the low
Crave, crawl, crave more

Down to sea depth's ground!

Music by Fran "kennst-ein?" Šikić (Guitars, Vocals) with Lyrics by Fran
And by Milad "Miloš" Huelshorst-Kamali (Drums, Vocals),
Perfected with the Bass of Doom by Lukas Meyer (Boon Goon, Bass),
And the voice of the Witches: Jonas Barancyk (Fjordheksa, Vocals),
With an ambient soundtrack by Lukas Meyer.
Together, we are KARTOUM!!!

Performed live by Kartoum (Aachen, Germany) in August 2020.
Recorded and mixed by Lukas Meyer at HeadHole-Productions,
As a part of the upcoming album MAELSTROM (04/20/21).

Bandcamp Daily  your guide to the world of Bandcamp

Featuring interviews with the mighty Haitus Kaiyote and genre-busting L'Rain.